On Thursday’s (August 16, 2013) meeting took place in a new location - Lawrence! We met in the manufacturing building of 99DegreeCustom, owned by Brenna Schneider, Founder, CEO, and a winner of Sandbox’s Winter Accelerator. The theme of tonight’s meeting was social responsibility in running a business.

What makes her business unique is that they are a custom manufacturer with a fast turnover rate, a business that does not have much international competition. Brenna based her company name, 99DegreeCustom, on the fact that 99 degrees is one degree before boiling in Celsius. She uses the company name as a reminder to build a business that will be a long-term sustainable fire - she hopes to run it for a long time. Influenced by the number of people in poverty and people who are unable to escape from poverty, she does not want to create jobs with more dead-ends. She wants to be able to have a role in poverty alleviation as well as fulfill the city’s need for apparel.

We talked about social responsibility as a group and how that relates to how we run our business. What kind of impact do we want to make on our community with our business? Some good examples that we talked about were Ben & Jerry’s mission statement and the Grameen Bank, a previously non-profit-turned-for-profit microfinance business in the developing world. Both business have good core values that they have stuck with since forever. It is important to be clear on one’s vision and values - know why you are doing it.

Some advice that Brenna gave us was the necessity to have an ‘Exit Strategy’, for it changes everything. A book that she recommends is Delivering Happiness by the CPA of Zappos. 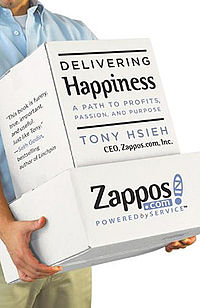